Zito Students Get a View from the Top at U.H.C.

On May 23, the Junior Coaches of Zito Elementary were selected to take part in a once-in-a-lifetime opportunity: a field trip to United Healthcare (U.H.C.), where they were exposed to daily office life as well as the many employees who they could look to as role models.

As the students arrived by bus, they were amazed by the sheer size of the United Healthcare building and later took turns at the window, gazing down onto the street and observing the view. For most of them, it was their first time being in an actual skyscraper and their sense of wonder and excitement was palpable. The excitement continued as the United Healthcare mascot, Dr. Health E. Hound, made his big entrance and the students were given the opportunity to take a picture with him as a souvenir of their big day.

Later Joe Gaudio, the C.E.O. of United Healthcare, spoke with the students about the importance of their role as leaders in the Junior Coach Leadership Program and the significance that it would later play as they began to plan their career paths. He encouraged them to be proud of all they had achieved this year and to continue on as leaders in their daily lives.

The students were then taken on a tour of the building and were allowed to ask any questions that they wished of the employees in an interview-style process. Many students were curious about what the staff liked most about their jobs or if their job made them happy. The employees answered each question happily and it was apparent that the staff was just as excited for this day as the students. 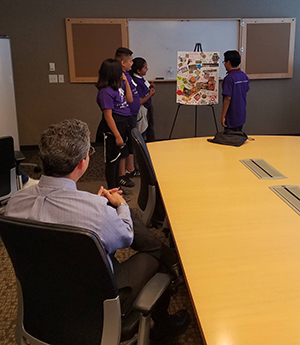 Next on the agenda was a lesson on the importance of healthy lifestyles presented by U.H.C. staff. Each student was then given the opportunity to sharpen their public speaking skills by presenting a handmade collage which reflected their vision of healthy lifestyles to the U.H.C. staff and C.E.O. One student even proudly announced that he would be presenting as the “C.E.O.” of his group which brought smiles to the entire room.

After each student received feedback on their presentation, it was time for them to head back to school, but not without some awesome swag from U.H.C. The students talked about the U.H.C. soccer balls they received and highlights from their day the entire bus ride home.

Thanks to U.H.C. for giving our Junior Coaches an experience they will never forget.