February Staff Member of the Month 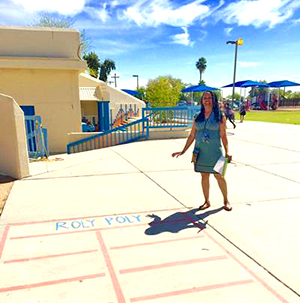 Ms. Paul is an Instructional Assistant at Sylvestre S. Herrera School in Phoenix, AZ.  Although she is a new addition to the Panther family this year, she consistently shows up every day with a positive attitude and a smile on her face.

Fully embracing the Playworks culture, Ms. Paul has introduced games from her childhood to the playground and has even come up with an original playground song that students sing and perform at recess. Taking off by storm, students can be seen racing outside to line up for her games. Ms. Paul understands the importance of meaningful play and brings her own style into the school community.

Recently, Ms. Paul taught kids at Herrera a new game called “Rolly Polly.” It became such a popular game at school, that Coach Devon and her school community recently painted permanent Rolly Polly courts on the school playground to make it easier for kids to come outside and play quickly.

From all of the staff and students, THANK YOU for all that you do to help #EnergizeAZ! Play on!

Playworks Arizona is excited to announce the growth of our team. In the fall of 2022, Lori Adukeh joined us as the Regional Director of Arizona, bringing with her 30 years of experience in strategic planning and program management. Advancing in her board membership role, Davida Redmond, will be Playworks Arizona’s new Board Chair to…