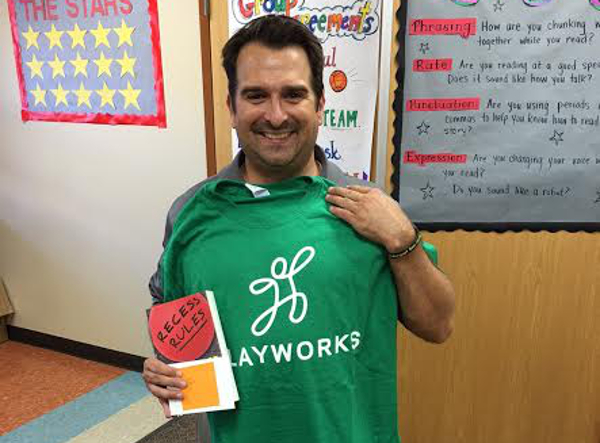 Assistant Principal Chris Berg has been a huge supporter of Playworks AZ, not only by being eager and willing to support Coach TJ to make the program successful, but also by being an active participant. You will often find Mr. Berg engaged in play, whether engulfed in a game of 4 square, leading and organizing 3 line soccer, encouraging high 5’s in every waiting line, or getting kids involved in all three recess areas. Triple digit temperatures are no match for Mr. Berg!

When Arizona decided to expand to a new district Mr. Berg was our champion, sharing the change his school has realized because of Playworks and identifying the right people for us to speak with. He has even been found tweeting photos of Amberlea students enjoying recess and Class Game Time.

His willingness to join in makes Chris a great role model for Amberlea students, and is helping to #EnergizeAZ.

Playworks Arizona is excited to announce the growth of our team. In the fall of 2022, Lori Adukeh joined us as the Regional Director of Arizona, bringing with her 30 years of experience in strategic planning and program management. Advancing in her board membership role, Davida Redmond, will be Playworks Arizona’s new Board Chair to…