Playworks Texas Coaches of the Month 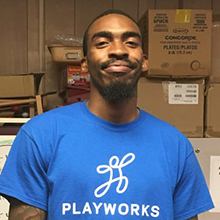 “Dream Team’s Coach of the Month for February is Cullen Wallace. This is Cullen’s second year with Playworks, serving at Chambers Elementary. Coach Wallace has given 110% to his school this year ensuring that both the staff and students at Chambers receive a high quality Playworks program.

He has put a tremendous amount of effort into his school, often arriving early, staying late, and supporting Chambers on a variety of different levels including monitoring the halls during testing and creating their annual Walk-A-Thon.

His ability to plan, organize, and effectively bring people together has helped contribute to a positive school climate. Staff and students are often seen high-fiving and playing ro-sham-bo even when coach isn’t around.

Every person that walks by his office stops to smile and wave hello. Thank you, Cullen for your hard work, service, and dedication this year! Double high-fives to you!” 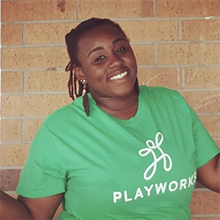 “February’s Coach of the Month is Linda! She was tasked to not only continue to support and grow the program at Sneed Elementary, but to help with the transition for the mid-year coach who would be taking over programming there.

She showed great leadership this month and stepped up for our mid-year coaches to show them the ropes.

Outside of that, Linda is an unsung hero amongst all coaches. She is someone that other members go to when they have questions, and she is always ready to help.

You are awesome Linda! You deserve a round of applause!”

Social-Emotional Skill of the Week: Social Awareness Social awareness is the ability to empathize with and understand the perspective of someone else, even though their background and culture might be different from yours. Resources for the Week of May 25, 2020 Game of the Day Challenge Are you ready to #PlayAtHome? We are challenging students…

How schools can approach recess in the 2020 school year ›

How can principals incorporate COVID-19 lessons into recess next school year? 1. Teach games that allow for physical distance. Educators can/should intentionally plan recesses that enable kids to play while meeting expectations for social or physical distance. 2. Prepare for virtual game facilitation. Kids can continue to have access to play during the school day…

Social-Emotional Skill of the Week: Self-Regulation Self-regulation is the ability to successfully manage our emotions, thoughts, and behaviors. Resources for the Week of May 18, 2020 Game of the Day Challenge Are you ready to #PlayAtHome? We are challenging students and families to learn and play one new game each day! This week’s Game Challenge…