Meet our Newest Coach of the Month – Coach Charles! 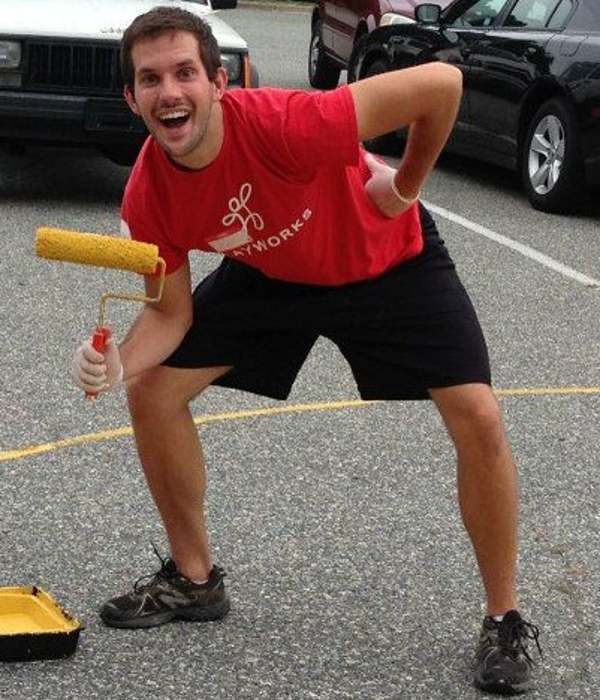 Please join Playworks North Carolina in congratulating our newest Coach of the Month – Coach Charles Helms! This is Coach Charles’ second year as a program coordinator with Playworks, where he consistently proves himself to be a strong, positive leader — not just in his school community, but also among his fellow Playworks coaches.

Charles started his Playworks career in Durham, but lept at the opportunity to step up to be a leader when he learned Playworks North Carolina was expanding into Wake county. This year, he is part of the inaugural Wake county team, and is the coach at Creech Road Elementary, where he is hard at work every day creating a safe, positive environment where every kid belongs.

Charles was named Coach of the Month because of the excellent level of engagement he creates among both the students and teachers at his school. His program manager, Ben Neveras, says that whenever he visits Charles’ school, one thing that always stands out is the abundance of high fives and positive language at recess. Coach Charles encourages this positive behavior through his unique, school wide incentive system which he calls “Go Bananas!”

“I wanted to do something silly and that the kids could relate to in some way,” Charles says, “Everyone at Creech Road Elementary loves the “Bananas Cheer” and I happen to own a human size banana costume – so the connection was just waiting for me.  The students in each grade can earn three stars at each recess: one for lining up well,one for positive language/high fives, and one for using Ro Sham Bo (the Playworks conflict resolution method) to solve problems. A total of 25 stars wins the prizes: A giant banana poster (that we track stars on), an appearance on “Tiger TV” (our school news program) and me dressed up as a banana at one of their recesses!”

Charles excels at creating high teacher engagement at recess through his own enthusiasm and high energy. He set up strong expectations for his teachers at the beginning of the year, and then ensured that they were able to meet these expectations by giving teachers specific roles that allow them to participate in recess in meaningful ways. For example, at a recent recess, Program Manager Ben witnessed one teacher playing “Shout Tag” with his students while also encouraging them to play Ro Sham Bo when they couldn’t agree on who was tagged. Meanwhile, at “Kick, Kick, Kickball” more teachers were cheering on their students, while another teacher helped pitch the game. This teacher engagement carried over into the girls’ basketball league season. Invited by Coach Charles, several teachers attended the games and cheered their students on – complete with encouraging signs that they held up throughout the games.

In addition to his normal tasks, Coach Charles has taken on several leadership roles at Playworks North Carolina this year. Not only did he league coordinate the majority of the girls basketball season in Wake County, as the head of the “Program Events” coaches committee, Charles also played a large role in planning the theme for a very successful end of season girls’ basketball celebration. Charles themed the event “S.W.I.S.H – Super Women in Sports History” and gave the program managers and office staff a great base for planning the details of the event.

“The professional development series, for me, is an opportunity for our PCs to recognize and develop the skill set that comes along with being a Playworks coach,” Coach Charles explains, “The work one does as a program coordinator prepares a person to act professionally and effectively in a number of contexts – even outside of Playworks. Our employees are at the top of the game in group management, conflict resolution, and kids well being. Translating these skills into a mindset that we are all professional educators/players only bodes well for the Playworks name and opportunities for healthy play for kids around the world.”

In addition to his ability to create high student/teacher engagement and his strong leadership skills, Charles was selected as Coach of the Month for his positive attitude and overall happy disposition. When asked how he stays positive so often, Coach Charles had this to say: “So much of our job as program coordinators is about being joyful – and I feel the same way about life.  Pushing a school towards enjoying play is about having fun, seeing the bright side, bringing those who are not feeling so bright, back to the sun, and seeing the silver lining all the time. Positive energy is the greatest catalyst for true change.”

Coach Charles, thank you for bringing your positive energy to hundreds of kids in North Carolina every day and creating true change in your community!

Get to know Coach Charles:

I read the job description after I saw an opening for a PC position and I called my mom telling her, “There is this organization that pays people to play games with kids – all day. I have to apply, and I have to get it!”

What do you like to do to relax/have fun?

I go on cake walks – this is when you pick our three or four bakeries in your town and you get some friends together and you walk to each one and get a snack.  I also run a lot to counteract these cake walks.

What is your favorite sport to participate in?

Where is your favorite place in the world?

I have never been more awestruck than I was at the Redwoods National Park – those trees really give some perspective.

What is the most rewarding part of your job?

Seeing the individual positives.  That is to say, in one day, at one recess, if one of my kids who usually have a really hard time are shining bright, or even smiling.  Just that one moment is the best – even if tomorrow they are back to fighting.