Fifty students from across Durham county recently gathered on Duke University’s campus for the second annual “Duke-Durham Fifth Grade Scholars Day.” This event was a collaboration between Playworks North Carolina and the Duke Hart Leadership Program, completely organized by a group of dedicated public policy majors from the university. The goal of the day was to encourage Playworks students to start thinking about their future and inspire them to pursue higher education after high school.

The students arrived mid-morning and got the day started by playing Playworks games on Duke’s beautiful campus while waiting for everyone to arrive. Five Playworks elementary schools were represented among the fifth grade scholars that day;  Fayetteville Street, Bethesda, Parkwood, Eno Valley and W.G. Pearson. After getting to know each other a little better through play, the students were broken up into smaller groups and began to take part in various activities that allowed them to immerse themselves in a college atmosphere for the day.

Athletes from the varsity men’s and women’s tennis teams led an overview of the different athletic programs that the university, taking part in a question and answer segment with the students before leading them on a tour of the several athletic facilities. They started in the Sheffield Indoor Tennis Center, where students saw not only the practice courts, but also got a tour of the conference room. They were intrigued by all the medals, plaques, and trophies on display. From there, the scholars were walked down to Wallace Wade Football Stadium where they perched high on the seats got to witness various Duke athletes training and working out on the fields and track below. The athletics activity ended with a tour of the Duke Basketball Museum and Hall of Fame, where students learned a brief history of athletics within the university. 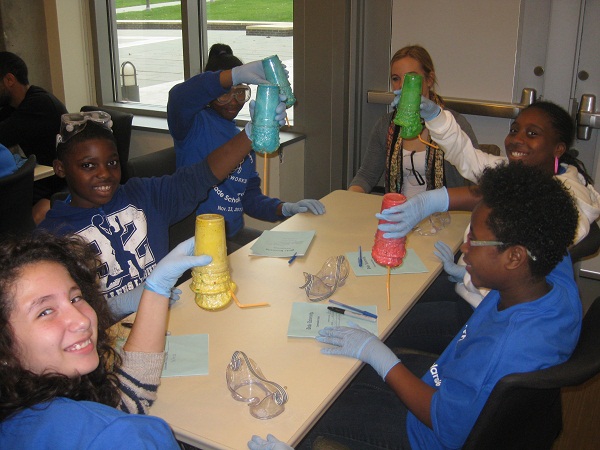 The next activity took place in an actual chemistry lab, led by a university professor as well as science majors from the Duke Chemistry Outreach center. The fifth grade scholars first were entertained (and educated!) with several fun chemistry experiment demonstrations by the college volunteers. Demonstrations included a fire tornado (air currents and density), water changing color before their eyes (chemical reactions), a volunteer making a board float (endothermic reaction) and the creation of elephant toothpaste (exothermic reaction). After watching the demonstrations, the fifth graders did their own hands-on experiment, creating a rapidly expanding “smoothie” that they were able to take home with them that day.

After the morning activities all the students gathered in a large social sciences classroom where they enjoyed a lunch of pizza and fruit. During this time they were able to chat about their experiences so far and play more Playworks games (of course!).

In the afternoon all of the scholars were able to meet members of a multi-cultural dance group from the university, “defMo.” After talking to the students about why they joined this club and what they enjoyed about it, the group then performed several routines to popular music that got the crowd really pumped up. They students were able to use this energy when the dancers led them in learning their own mini-routine to music. The activity concluded with a freestyle session where the scholars were encouraged to come forward and share their talents with the group. 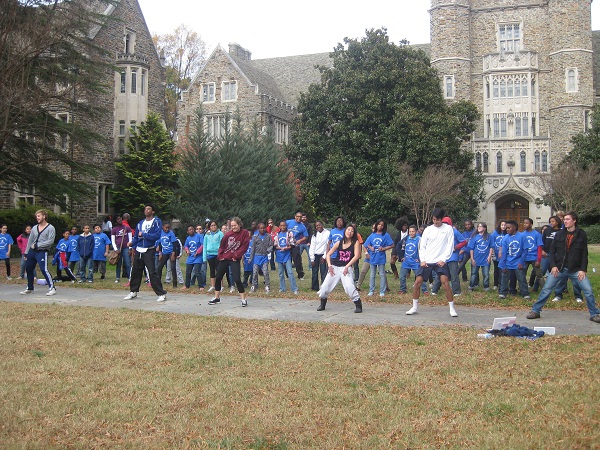 After the dance session, all of the fifth graders were led on a tour of the university’s central campus. They walked past the dorms area where they took in the Gothic style architecture dating back to the 1930’s. From there, they quietly entered the main library where they were witness to what college style studying looks like. The tour ended at the famed Duke Chapel which allowed the scholars to sit quietly and take in the scenery and marvel at the  50-bell carillon and pipe organs with thousands of pipes of each. 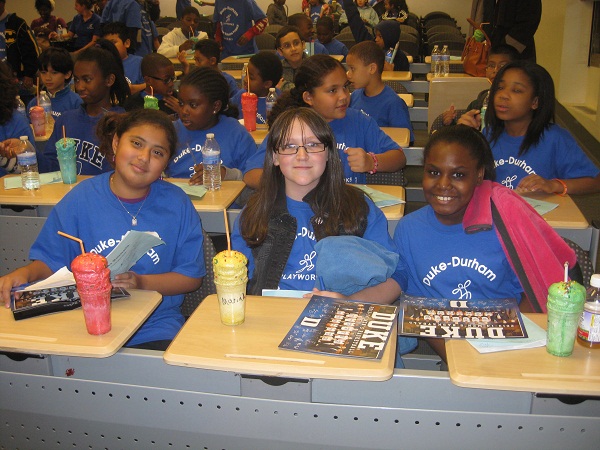 After a long day spent playing, conducting science experiments, touring campus areas, and dancing, the scholars wrapped up their experience back in the social sciences classroom. Here they were able to journal about their day and take part in a discussion session led by the Duke students that planned the entire event.The fifth graders learned more about college majors and how they relate to their current interests. They also learned about different activities they could take part in on a college campus, and what dorm living is like. Throughout the discussion the scholars were not only told about Duke University specifically, but were encouraged to learn more about colleges and universities in general.

In true Playworks fashion, the day ended with a cheer — pumping the scholars up before sending them home with the overarching message that going to college is a real possibility for anyone who is determined enough to do so! 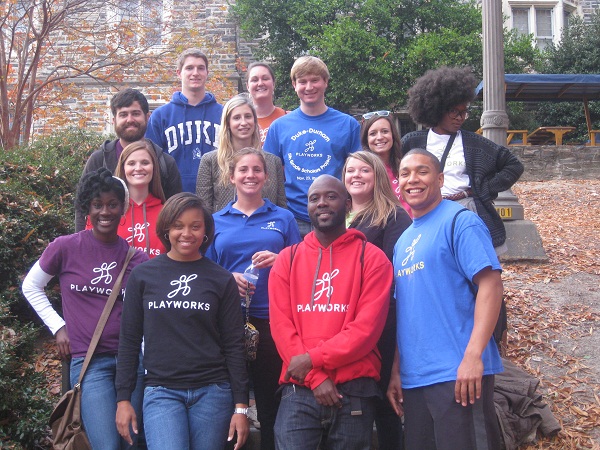