Meet our October Coach of the Month- Coach Grant! 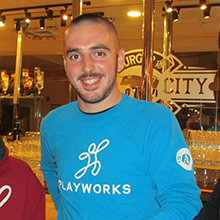 Playworks NC is excited to announce that Coach Grant Weixel has been selected as our October Coach of the Month! This is Coach Grant’s second year as Program Coordinator at E.K. Powe Elementary in Durham where he has been doing great things and creating strong relationships during his time there.
This year, Coach Grant recruited a strong and diverse group of students for E.K. Powe’s inaugural soccer team for the Playworks Soccer Jamboree. Not only did ALL of Coach Grant’s team attend the Jamboree, but he also had a great show of parent and family support that day; which really let everyone see what a great sense of community he is creating within his school.
Not only is Coach Grant rocking it on the playground with the kids, but he has also been doing some awesome “behind-the-scenes” work this year. All of his paperwork has been turned in on time (or before!) thanks to his clutch organization skills. During Pre-Service this year, the returning coaches learned about a time management tool that they could use to organize their week, and Grant has used that to help him stay on top of everything and focus in on what is most important when it comes to running the Playworks program at his school.
Coach Grant often goes above and beyond the basic requirements of his program. For example, last year he started an “Environmental Club” at his school after the school grounds went through some construction and he thought it would be a great opportunity to teach his students lessons on conservation and the importance of keeping their school looking nice. “I wanted to educate them on why it we should never litter and teach them what it means to be a part of a community and to volunteer your time towards a cause,” says Grant. After the success of last year, Coach Grant is excited to see what the club will do within the school this year.
Through his hard work with all of his students, the efforts he has made in trying to create a strong community within his school, and for his diligent organization skills, Coach Grant has truly set himself apart this year. His Program Manager, Janelle Averill, sums it up best: “Grant stands out as our October Coach of the Month because of the amount of confidence and passion he exudes in all that he does. Whether it is with the kids or with other staff members, he always keeps ‘the big picture’ in mind, and that has helped him to succeed.
Get to know Coach Grant:
What first interested you in Playworks? The idea of working with kids and teaching.
What is the most rewarding part of your job? Watching the kids learn to respect each other and then watching how they progress throughout the year.
Favorite Playworks game? 4-Square, for sure.
Favorite sport to watch? Football Favorite sport to participate in? Ultimate Frisbee
Best comfort food? Barbecue-southern style