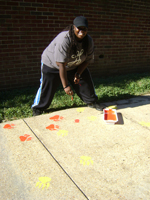 Coach Gantt is the great coach at Ketcham Elementary School in Northeast DC.  She is a first-year AmeriCorps member and a native Washingtonian.

“The first graders get so excited when we do it that it has become my favorite.”

Why Coach Gantt loves working for Playworks?
“I love working for Playworks for many reasons, but greatest reason is that I love playing with the kids. Nothing can compare to seeing the kids play and forget any troubles they may have during those few minutes of happiness. The person that they were mad at is forgotten, the fact that they got into trouble for not turning in their homework is forgotten, and the fact that someone hurt their feelings is forgotten. All that matters to them is playing and having fun at that moment.”

One of Coach Gantt’s favorite moments as a coach
“One of my favorite moments as a coach was when I had a sixth-grade junior coach serve his first recess. While setting up for recess, I gave him a short pep talk and told him that he could run a game or watch me do it. He decided to run the game by himself. He ran a football game with the first-graders and did an excellent job, so I decided to let him run a basketball game with the second and third-graders. After seeing the way he ran both games I was impressed with his patience, enthusiasm, and overall character. He was calm, encouraging, and fair to each student. That afternoon we had a Junior coach training scheduled and before it started I praised him on his performance during his first recess. I stated that he took the pep talk I had given him and went above and beyond with saying, “good job!” and giving high fives.  He replied that I never told him to do those things, just make sure they play the game correctly and don’t hurt each other. He said he figured to do those things because that’s what he sees me doing every day. At that point, I knew that I had made the right choice selecting him as a junior coach.”

For the past two years, Playworks Mid-Atlantic has been teaming up with Google’s Be Internet Awesome campaign to work towards inclusivity and anti-bullying on the playground and the internet. Our Let’s End Bullying event was held in downtown Washington D.C. and consisted of a keynote given by John Gomperts of America’s Promise Alliance, as…