Working with Playworks has completely changed how I view the world and my place within it. I’ve always loved working with children and felt like I had a special ability to connect with kids of any age, but I have often felt more like a glorified babysitter rather than a teacher or person of influence. This job changed how I see myself.

After a few months of working at Fowler Drive Elementary, I began to get into a rhythm of things. The kids knew when and where to find me, the teachers started recognizing and including me, and I felt more comfortable reaching out to kids that I felt needed some extra encouragement. 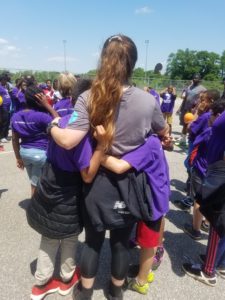 I have always been partial to the students who were constantly getting in trouble, partly because I used to be one of those kids and partly because I knew there was a reason behind their behavior, aggression, and choices that made them end up in timeout. I believe that kids are naturally good and only do bad things when they get the wrong kinds of attention or no attention at all.

I remember one student of mine who was always getting in trouble, always picking on his classmates, and always testing the limits of what he could get away with. I immediately sympathized with him. For him, the anger was a way of giving up. If no one was going to believe that he could be good and do good things, then why should he try?

At first, I stated out by becoming his friend, showing him encouragement and praise for his athleticism and cooperation. But it would often be followed by anger and backlash the moment he was back in line with his classmates.

He also had an issue with lining up and going inside when time was called. In order for me to do my job and show the rest of the students this was not behavior that would be tolerated, I had to fix it.

We started racing every day to the line. After a while, other students would join in and as time went on, we had most of the third grade racing to line up at the end of recess. Finally he was getting recognized for doing something good rather than hurtful.

I could tell he was smart and just needed to be challenged and given a chance to prove himself. The two of us went to his teachers and asked whether he could stay later to help me clean up my equipment outside if he worked on being kinder to his classmates and more responsive to his teachers. He became one of my regular helpers.

By the end of the year he was not only helping me clean up, but also setting up games and running them on his own! He was kind and welcoming, patient and responsible. Sadly he moved away right before the end of the year, but before he left I gave him an award titled “Honorary Junior Coach” and I hope he has taken the lessons he learned at Fowler with him to his new school.

I cannot say that I was the reason this student became a kinder person, because he is the reason. He is also the reason why I know this job is so important even to the ones that might not seem to care. He showed me that my job was not just to watch these kids while they are outside, but to give them more opportunities to grow and prove to themselves that they can change and spread kindness.

I’m not sure if he will remember me, but I know for a fact I will never forget him and the things he has helped me see in myself.